Solidarity text to the Greek General Strike by REinFORM

The past two years the Greek population is witnessing the harshest austerity measures since the introduction of the Euro. Greece became the ‘black sheep’-member of the European Union and had to be punished hard. In 2010 the first austerity package was imposed by the Greek government under the commands of the Troika (the IMF, the EU and the ECB). As a result, last month unemployment reached 18% and 40% among the youths. Numerous small and medium companies went bankrupt and a series of massive lay-offs were initiated both in the public and the private sector. Wages and pensions of civil servants were reduced up to 500 Euros. One year after the first austerity package, the forecasts of the IMF and the Greek government concerning the public deficit were proved completely wrong. Instead of the growth that they promised us for 2011, the economy is expected to contract with another 5.5%. 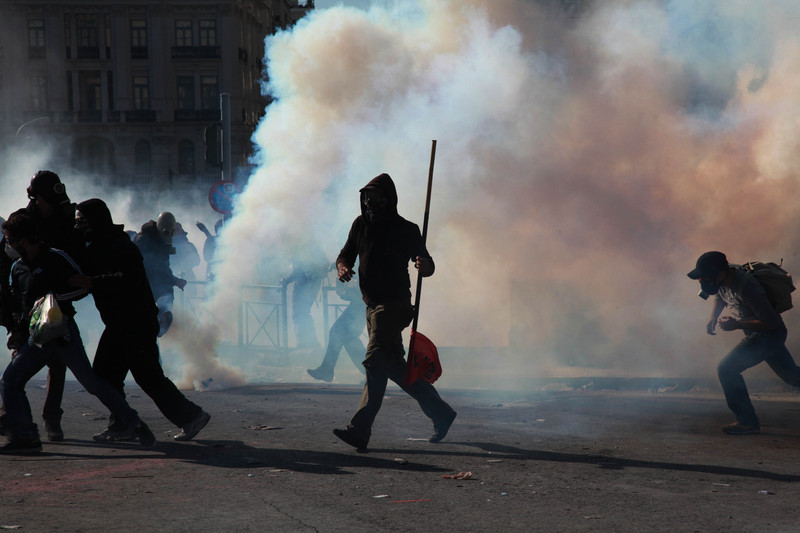 Last June hundreds of thousands of people gathered at the Syntagma Square and other squares around the country to demonstrate their opposition to the new bail-out that was imposed by the Troika and the Papandreou – government. The agreement was monstrous. According to the standard neo-liberal recipe, Greece not only had to completely liberalize its economy, to privatize all state-owned enterprises – in extremely low prices – and to abolish the majority of welfare benefits but also to lose its sovereignty which consists a major constitutional violation. The Greek workers have to accept wage cuts up to 40% and the rapid privatization of health, social security and education. Clearly, although the initial plan failed miserably, the recipe remained the same.

At that time the resistance of the people reached its peak. The so-called socialist Papandreou government responded with a massive wave of police suppression. For two days, the centre of Athens became a warzone. Several people were severely injured and hundreds of demonstrators were arrested. Terrorism is the only word that comes to our mind when we watch the pictures of those days.

Even though the Greek government and its European counterparts have tried everything, the people still resist. In the coming two days, a general strike has been called. The new plan of the government is to lay off 30.000 people from the public sector, to apply even more wage cuts and most importantly to abolish the collective wage agreements. In times were the minimum wage is Greece is 592 Euros and more than 600 billion have been transferred by rich Greeks to Swiss banks, the president of the socialist international, G. Papandreou wants to completely destroy the only legal way for working people to support their right to employment.

Because we believe that after the events of the 28th and 29th of June in Syntagma Square the Papandreou government has lost any legitimacy to rule and legislate.

Because we believe that the European Union has been converted to an oligarchic institution driven by the interests of the banks, the multinationals and some lobbyists.

Because every day we see our families and friends to be driven to poverty and to be forced to immigrate.

Because we would like ourselves to be able to return to our home-country whenever we want and live decently.

Because people all over the world have started to rise up.

We, some Greeks living in the Netherlands, would like to strongly express our solidarity to the people in Greece who will participate to the general strike of the coming two days and send a message to everyone, saying that we will do whatever is possible to reverse the situation in Greece and in Europe.