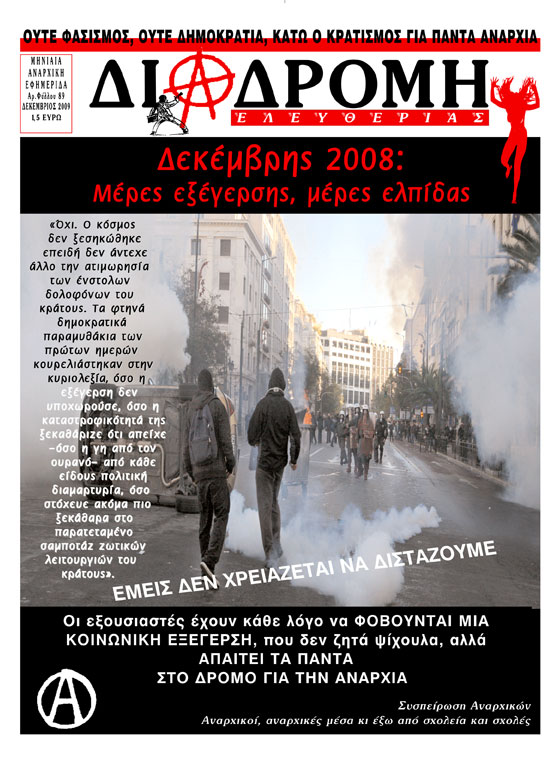 One year after the social rebellion last December, the government, political parties, experts of the economy, journalists and publicists of all kinds try to lead the ‘ship’ to leeward ports. Constantly they are aware of the complications. They talk about the ‘multifaceted crisis that currently characterizes the greek society at a time of great ideological confusion’ and also about the existence of ‘ideological leadership emptiness’. Yet, they just seem impuissant to ensure social control.

They admit that the tempest not only seems to persist, but furthermore the signs continue to be alarming enough. The risk of re-occurring social conflict certainly refers neither to any ‘non grata’ damage nor to the paralysis of commercial activity.

Their nightmare, a long time ago now, focuses on who else will go out on the streets, angry and ready to oppose those considered responsible for the state of despair by which they have been already driven. In other words, they focus on the people who will stand by the side of those tagged as ‘traditional’ disturbers, as has already happened last December, what will be their way to resist and most importantly what will stop those people. And here is the essential of the threat to the power, the range of which can not be calculated, and certainly neither its consequences.

We will say it again. What has been dissolved in December, were the pillars of power, which is why the wounds are still wide open. This does not mean that the executives of state affairs did not go into corrective actions. It does not mean that they are not looking for time credit. But it seems they do not have any. This is the clear up also by their european associates. And of course the question is not starting or ending on the economy or on a possible bankruptcy.

Under these circumstances, we should feel the euphoria. The enthusiasm for the recent outbreak of the uprising should cover any doubt. Although, at least, as far as we are concerned, things are not like this. That is why we passionately insist to look exhaustively for extensive discussion about everything related to Anarchist ideas and practices. Do not rely on any ‘small’ or ‘bigger’ achievement crowned with bays. We should focus on everything ‘wrong’. Do not close your eyes in order to become agreeable.

We should remember now and then so many Anarchists which in the past, each time, indicated that when the numerical increase gains religious significance, the penetration of authoritarian ideas and practices should be taken for given. So many comrades wrote down with gloomy colours the effects of lacking morals, the absence of critical attitude, the extended confusion, even on some essential Anarchist views and considerations, which ultimately lead to the most blatant distortions.

Among these comrades, there is Max Nettlau who wrote characteristically in October 1932 in the History of Anarchism: ‘The upcoming freedom is not a product of a war of conquest. It does not belong to the army that ensures the victory, even if the unions are winning, or to their great leaders. We do not know those take-overs. Only the ones of Napoleon, Lenin or Mussolini. The trade unionism of those who think differently and unlike the Anarchist idea, it is a trade unionism that seeks to militarism, to economic fascism, to conquests and to axioms. The true revolutionary struggle is tearing down the barriers, it cleans the soil, and when possible, it seeks the establishment of the new scheme, which most likely is at risk to be limited, with delays, lots of obstacles and setbacks, when we try to integrate it into the old context, even if is in relation to the unions. Let’s forget the present. This is the way to the future’.

Comrades,
have a nice December